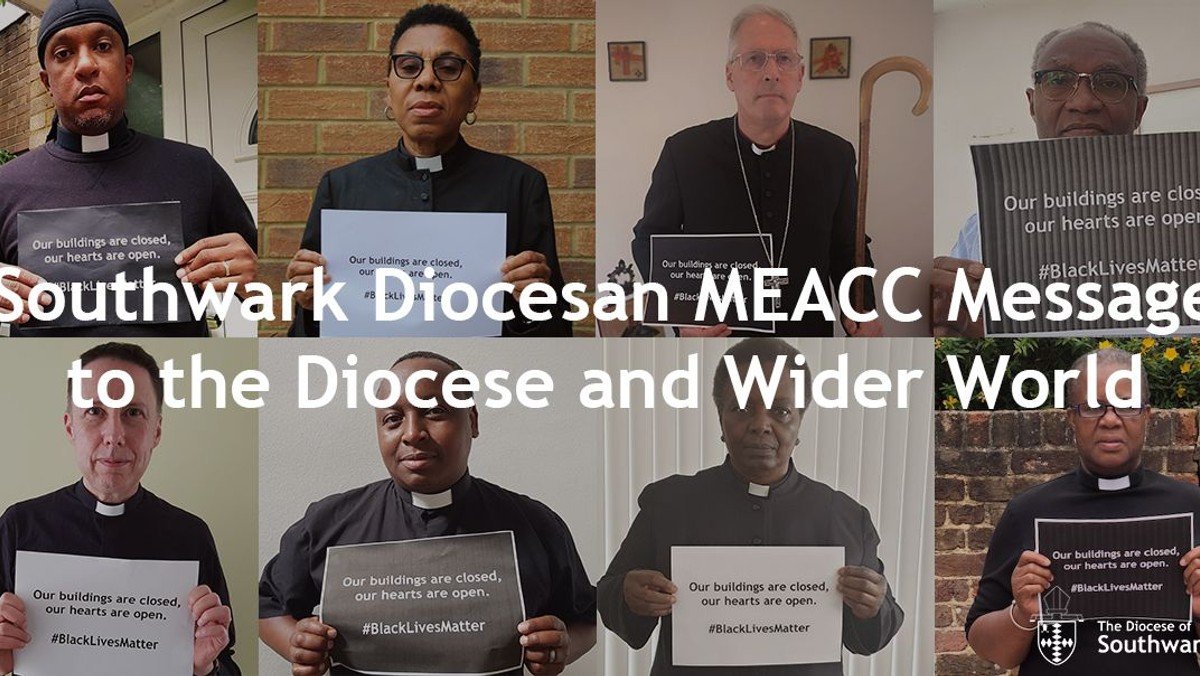 The Bishop of Southwark, Rt Revd Christopher Chessun, Chair of the Southwark Diocesan Minority Ethnic Anglican Concerns Committee (MEACC), has joined with the Archdeacon of Croydon, The Venerable Dr Rosemarie Mallett and the Chairs of the MEACCs in the three Episcopal Areas to send a message to the Diocese of Southwark and to the wider world.  They declare: Our churches are closed, our hearts are open #BlackLivesMatter.

The Revds Cordella Dawson and Darius Weithers, Chairs of the Croydon Area MEACC, The Revds Stanley Njoka and Patrick Eggleston, Chairs of the Woolwich Area MEACC and The Revd Funke Ogbede and Mr Michael Phillips, Chairs of the Kingston Area MEACC each took a photograph of themselves holding a sign saying ‘Our churches are closed, our hearts are open #BlackLivesMatter’. These have been made into a photo which has been tweeted out.

Bishop Christopher said, ‘We wanted to stand in solidarity with those who are lamenting, praying and protesting about the death of Mr George Floyd in Minnesota. We hope that, by sending out this photographic statement of our firm belief that Black Lives Matter, we will encourage others in the Diocese and more widely to stand firmly with those who will mark next Monday 8 June which is two weeks to the day since George Floyd was killed. Racism is a blight on so many people’s lives and the Diocese of Southwark, working through its MEACC, is committed to challenging and eradicating racism in all its forms.’

Marjorie Welch
Sunday, 7 June 2020 18:41
Please pray for me and my family haven’t been to work from March stuck indoors I want to collector find it very hard as my attack panic attack because I’m afraid please pray for me